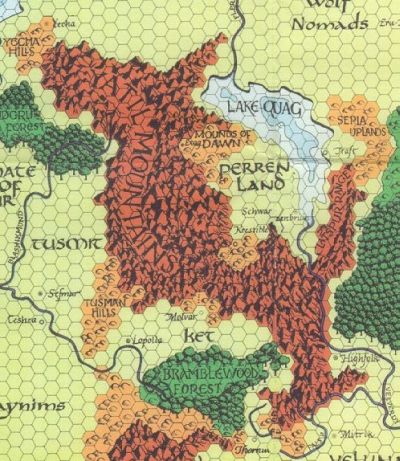 The Yatil Mountains and surrounding territory, as depicted on the Darlene Map (1980).

The Yatil Mountains are a mountain chain located in the western part of the Flanaess.

The Yatils are nearly impassable except in a few places, most notably via a difficult pass linking Perrenland and Ket, and as such form the barrier between the cultures of the Flanaess and the Baklunish West.

Passage through the Yatils is made even more difficult by large numbers of orcs, ogres, giants, trolls, and other creatures such as dragons, though the latter are found more in the northern branch than in the south. Humans and nonhumans (especially dwarves and gnomes) also live throughout the mountains, mining the rich deposits of various ores and gems.

The head of the True Faith of Al'Akbar is the Grand Mufti of the Yatils.

Lairs of evil are rumored to exist within the valleys of the Yatils, including an ancient temple devoted to Tharizdun, and the Lost Caverns of Tsojcanth.

Mordenkainen's Obsidian Citadel is also known to be located in the Yatils.