From Greyhawk Wiki
(Redirected from Spatterdock)
Jump to navigationJump to search 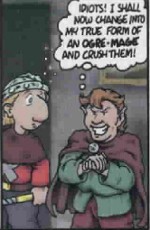 Qesnef is an ogre mage, resembling a huge, horned, blue-skinned ogre, but he normally uses his innate shape-changing magic to appear in the guise of a doughty halfling.

Qesnef has 34 subsumed minds under his control. His favorite servant is the vampire Ctenmiir, who he permits to use the magical warhammer Whelm.

Qesnef served the first False Keraptis, a gnome, but after that version of Keraptis's death, Qesnef himself became one of the beings imprinted by Keraptis's personality. Calling himself Keraptis but known as Spatterdock by others, Qesnef acquired subsumed 34 other minds (mostly gnomes) under his control using the Keraptis-imprinting spells, which added to his power until he was the equivalent of a 15th level wizard. He managed to locate and claim one of the true Keraptis's four implements of power, the warhammer Whelm, although he gave it to his servant Ctenmiir to wield in battle.