The Free City of Greyhawk, also known as Greyhawk City and often called the Gem of the Flanaess, is a powerful city-state located in the central Flanaess. The word "Greyhawk" is often used in reference to those lands controlled by the Free City, though the proper term for the entire realm is the Domain of Greyhawk.

The Greyhawk campaign setting, created by Gary Gygax in the 1970s, takes its name from the city and was the most widely developed setting for the Dungeons & Dragons game until it was overtaken by the Forgotten Realms setting in the 1990s.

Travelers enter one of Greyhawk's smaller gates, as depicted in The City of Greyhawk boxed set (1989). Art by Valerie Valusek.

Greyhawk, named for the small grey hawks which populate the region, was originally a trading outpost on the Selintan specializing in local wood and woven garments, which was known by that name as early as 330 OR (-315 CY). In time, the town developed strong textile and meat-packing industries. From the earliest days, Greyhawk was ruled by a warlord who took the title "Landgraf of the Selintan." This first Landgraf's son was then married to the Gynarch of Hardby's daughter. The nuptials formalized a political alliance that served as the basis for rule over the Lanstadt of Selintan, the area that eventually became known as the Domain of Greyhawk.

In 4 CY, Greyhawk came under the domination of the Great Kingdom of Aerdy and remained so while strong Overkings ruled from the Malachite Throne in Rauxes. The Great Kingdom's influence over the city began to wane during the third and especially the fourth centuries as the House of Rax declined and the Overkings hold on distant provinces became increasingly tenuous.

Rise to prominence, decline and recovery

In approximately 310 CY, the mage Zagig Yragerne emerged from the Wild Coast and bribed his way into a seat on the Directing Oligarchy. Approximately 320 CY, the Oligarchs elected Zagig Lord Mayor of the city.

Greyhawk subsequently rose in fame and prominence under the leadership of Lord Mayor Zagig. He instituted legal reform, developed a new currency, fortified the walls, founded the city's first university and embarked on a major building program. Most notably, he directed the construction of nearby Castle Greyhawk.

Greyhawk soldiers train on the Citadel grounds, as depicted in The City of Greyhawk boxed set (1989).

Although Zagig -- later known as Zagyg -- became increasingly erratic over time, his rule is generally considered to be the most effective in the Free City's history and brought widespread prosperity to the region. Much to the annoyance of Dyvers and other rival cities, Zagig proclaimed Greyhawk to be the "Gem of the Flanaess," and did much to ensure this moniker was justified. Unfortunately, the "Mad Archmage" disappeared in 421 CY, leaving no clues regarding his whereabouts, and no heir to inherit the title of Landgraf.

In 498 CY, after decades of Zagig's absence, the Landstadt was therefore abolished, the title of Landgraf permanently retired, and the Free City's Directing Oligarchy assumed political authority. The new Lord Mayor Paerinn officially proclaimed Greyhawk a free city, though it had been effectively independent of the Great Kingdom's rule for over a century.

Soon thereafter, the city lost its claim over Hardby and the Wild Coast, as the leading women of Hardby broke from Greyhawk and established the ruling office of Despotrix. This loss of lands sent the Free City into economic decline, a situation that persisted for several decades. Fortunately, the discovery of treasure in the dungeons beneath Castle Greyhawk and other nearby locales set off a gold rush of sorts, and Greyhawk's economic fortunes recovered substantially in the second half of the sixth century.

The Greyhawk Wars and the post-war situation

The Free City of Greyhawk actually had less direct involvement in the so-called Greyhawk Wars than many other political entities across the Flanaess, but because the final truce was brokered in Greyhawk in CY 584, the war has come to be named for the city.

The Wars had several important effects on the city, however, particularly in that the unrest drove Hardby and the Wild Coast cities of Safeton and Narwell to re-submit to the rule of the Directing Oligarchs. This situation is unstable, however, as it was largely fear of Turrosh Mak's humanoid raiders from the Pomarj that prompted this move, and the Despotrix and the Wild Coast cities once again agitate for increased independence.

Also as a result of the Wars, the city has seen an influx of new citizens. Some of these are wealthy diplomats, and some are "nobles" who have contributed significantly to Greyhawk's coffers with the purchase of various counterfeit titles and documents. But many newcomers to Greyhawk are destitute refugees, or are merely using the city as a base for hatching political plots and intrigues across the Flanaess. In particular, there are persistent rumors of covert Scarlet Brotherhood operations in the city.

The post-war situation for the Free City is therefore mixed. Greyhawk's finances are in the best shape they have been since Zagig's departure, but the city faces significant challenges arising from political instability and increasing criminal activity.

The Free City of Greyhawk is located centrally in the Flanaess, which is the easternmost part of the continent of Oerik on the world of Oerth. The city controls a large swath of land along the Selintan River from the Nyr Dyv south to Woolly Bay, most of the Cairn Hills, parts of the Gnarley Forest, the northern Wild Coast, and parts of the Abbor-Alz. The entire region is officially known as the Domain of Greyhawk. The Domain is bordered on the east by the Abbor-Alz and its western border lies within the Gnarley Forest. The area south of Greyhawk City along the Selintan is known as the Plain of Greyhawk.

Areas of note immediately outside the city walls include Shacktown, Barge End, and the Stone Ring. 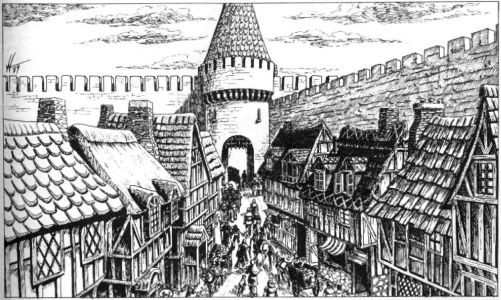 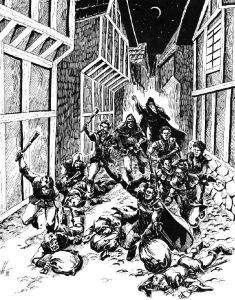 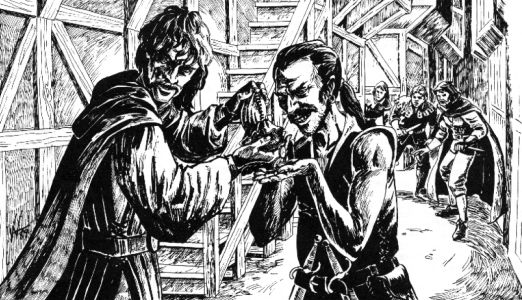 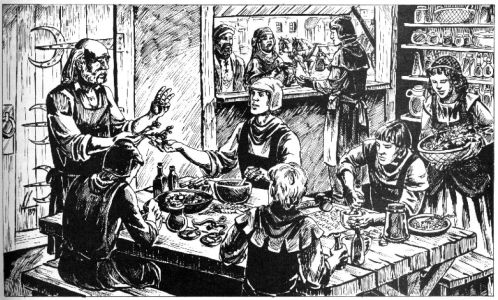 As of 589 CY, the city itself boasted a population of 69,500, making it one of the largest cities on Oerth.

The most widely spoken language in Greyhawk City and most of the Domain is Common.

Greyhawk's Directing Oligarchy elects one of its own as Lord Mayor, who serves as the head of state in addition to his Directorial duties. The current Lord Mayor, Nerof Gasgal, has held office since 571 CY. The Lord Mayor heads both the Directing Oligarchy and the Council of Mayors and Manorial Lords. The chief of state also officially heads the military, though actual command is most often left to the Captain General of the Watch.

The Free City of Greyhawk is ruled by the Directing Oligarchy, an executive council of twelve to eighteen members representing the city's major professional guilds and the military. In some cases, the Oligarchy may include important wizards and/or clerics. New Directors are chosen by current council members when a vacency must be filled.

The Greyhawk Public Council, in theory, serves the interests in the citizenry-at-large. This popularly-elected advisory body consists of eight representatives, one from each of the city's quarters. The Public Council meets with the Directing Oligarchy on a quarterly basis.

Lesser matters in Greyhawk City are tried by magistrates from the Guild of Lawyers and Scribes.

The city's coat of arms is blazoned thus: Sable, a castle triple-towered argent, in chief two chains each of four links chevronwise of the second, in base six bezants.

A scene from one of Greyhawk's markets, as depicted in The City of Greyhawk boxed set (1989). Art by Valerie Valusek.

The Free City of Greyhawk controls most of the Cairn Hills, which provide the domain with great mineral wealth, such as iron, gems, and silver.

Nearby Castle Greyhawk, with its extensive dungeons, draws adventurers and traders to the Domain of Greyhawk from across the Flanaess. As such, the Castle generates significant economic benefits for the City in trade, taxation and treasure.

The Domain of Greyhawk's standard coinage consists of the platinum plate (pp), gold orb (gp), electrum lucky (ep), silver noble (sp), and copper common (cp). All of the coins are round, except for the platinum plate, which is square. The current coinage system replaced the previous system, which included coinage worth less than the copper common known as bronze zees, brass bits, and iron drabs.

The City of Greyhawk boxed set from 1989 offers the most complete treatment of the Free City. The publication provides information regarding the history and culture of the city, along with maps of the city and its sewers. Descriptions of major political organizations, leaders, villains and a number of adventure setups were also included.

The boxed set was followed in 1990 by a trilogy of adventure modules set in the city and centered around a mysterious villain called "The Falcon." These included Falcon's Revenge, Falconmaster and Flames of the Falcon. Some of the other modules set in part or entirely within the City of Greyhawk include: Vecna Lives! (1990), Treasures of Greyhawk (1992), and Return of the Eight (1998).

Another boxed set, 1992's From the Ashes, updated the overall Greyhawk setting, included information regarding the City's situation following the Greyhawk Wars, and contained additional adventure cards set in the city. Publications such as Greyhawk: The Adventure Begins (1998), the Living Greyhawk Gazetteer (2000), and Expedition to the Ruins of Greyhawk (2007) also provide information regarding the city in the post-wars period. 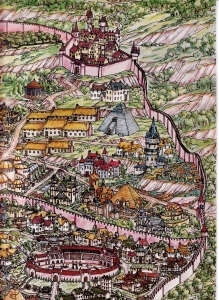 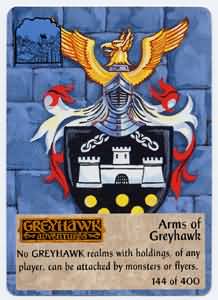