From Greyhawk Wiki
(Redirected from Elves)
Jump to navigationJump to search

Elves, also known as olves or olvenfolk in the Flan tongue, are one of the primary civilized races of the Flanaess. Elves speak Elven.

Elves are renowned for their grace and mastery of magic and weapons such as the sword and the bow. Becoming physically mature by the age of 25 and emotionally mature at around 125 (Races of the Wild, 2005), they are also famously long-lived, capable of living more than half a millennium and remaining physically youthful. They rarely die due to the wear of age. Possessed of innate beauty and easy gracefulness, they are viewed as both wondrous and haughty by other races; however, their natural detachment is seen by some as introversion or xenophobia.

Elves are most often associated with temperate forests, though this applies chiefly to high elves and wood elves. Aquatic elves are only found in temperate aquatic regions, and gray elves often prefer temperate mountains. Snow elves, drow, and grugach are found almost exclusively in cold mountains, the Underdark, and deep forests, respectively. Valley elves are rarely seen outside the Valley of the Mage.

In the Flanaess, large numbers of elves can be found in Celene, Highvale, the Lendore Isles, Sunndi, the Duchy of Ulek, the Valley of the Mage, the Vesve Forest, and the Vault of the Drow. Verbobonc was originally an elven settlement, though they have mostly left that region to the humans and gnomes. The City of Summer Stars is a lost and ruined elven community of fable and legend in the depths of the Adri Forest, now under a dreadful curse.

Slightly shorter than the average human, elves are also noticeably more slender and graceful (this is reflected in a bonus to dexterity and a constitution penalty), averaging between 4 1/2 to 5 1/2 feet and 95 to 135 pounds. Males are slightly more muscular on average, there is little difference in height between the sexes, and facial hair is unheard of. Their features in general may be described as more angular and defined; including long, pointed ears and wide, almond-shaped eyes. Most elves have fair skin and dark hair, though this is no more true of all elves than it is of humans. They have a reputation for careful grooming, more so than perhaps any other race. This frequently extends to their clothing, which is luxurious and well-kept, though not to the point of impracticality.

Elves do not sleep as most other creatures do, instead falling into a four-hour restful trance. Consequently, elves are unaffected by sleep-inducing spells and effects, and are able to remain active far longer than other races.

Elves also do not age as other creatures; their physical appearances remain constant from achieving physical maturity to death. Elves do grow physically weaker and mentally stronger as they grow older, and accumulate a "glow" from the strength of their souls as they age (Races of the Wild, 2005).

Most elves are usually chaotic good, though grugach tend to be neutral, Valley elves chaotic neutral, and drow neutral evil.

Most elves, other than drow and Valley elves, follow the Seldarine, the elven pantheon, consisting of the following deities: 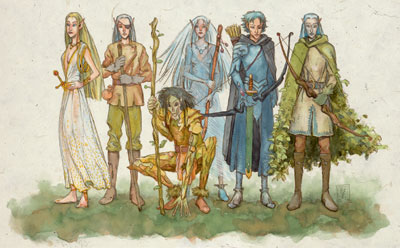 The only deity known to be honored by the Valley elves is Ehlonna, who is also frequently worshipped by other elven peoples. Dark elves most often worship Lolth, the Demon Queen of Spiders, or one of her brood.

Elves are of various sorts, including a marine race, all of which are detailed here.

Elves inhabited the Flanaess for many centuries before the Great Migrations introduced hordes of humans, orcs, and goblins who pushed them from the grasslands and prairies deep into the ancient forests that were their first home and most secure retreat.

The grugach and Valley elf first appeared in Dragon #67 (November 1982) in the series "Featured Creatures," an ongoing series of articles where Gary Gygax released information on official creatures before their release in the upcoming Monster Manual II (1983).